Stacey Hempel works as a Music Mix Tech and Re-Recording Mixer in the audio industry. She chats with us about one of her most recent gigs, the 2014 Grammy's, her favorite plug-ins, mistakes to learn from, and her love for football. It's a great read for anyone interested in this field and something I thoroughly enjoyed reading myself.

Thanks so much for contributing to the forum, Stacey!

Having recently worked the 2014 Grammy's as a Music Mix Tech, can you go into detail on what that involves for the production of the show? What preparations are made to make sure everything runs smoothly?

Let me start my answer with, there's a HUGE amount of detail involved in a production the size of these award shows & what I'm about to tell you is our portion of the show. Keep in mind there are 2 stages so there are 2 monitor engineers & desks as well as 2 FOH engineers & desks plus the broadcast truck with it's audio engineers. Most importantly there are 2 seperate stage crews for each stage in addition to our 8 member team in the 2 music mix trucks. Many audio bodies alone without counting all the cameras, stage mgrs., lighting, rigging, sets, etc.

Now for my answer on my portion of the show:

We load in on the Wednesday before the Sunday show, line check both stages at the end of Wednesday, rehearsals are Thursday – Sunday with the live show being Sunday evening.

For live awards shows such as The Grammys, CMA's, Latin Grammys I oversee running the 2 Pro Tools recording machines for multitracking all the rehearsals. Multitracking occurs during the dress rehearsal & live show as well. After the show the drives are handed over to the Academy for any future re-purposing.

The 2 Pro Tools recorders are HDX v10.3.8. The mix desk is also a Pro Tools HDX v10.3.8 with an Icon D-Control surface, this system does not record any audio. There are 4 Pro Tools systems total in the truck, 2 are recorders only, 1 is the mix desk only & 1 is used as a satellite system for video playback locked to either of the recorders. We create an identical template for both of the Pro Tools recorders with identical I/O. I set up the sessions each morning for that day's rehearsals, ex: 2014 Grammys Reh Thurs 012314. On show day I create 2 sessions, 1 for the Dress Reh & 1 for the live Show. The audio reaches the music mix truck via Madi fiber from our self contained mic pre amps backstage (there is a dedicated audio operator just for our mic pre amps). We receive the audio signal to the pre amps from a split of each of the 2 stages. There are 2 different stages on these shows with 56 channels of audio each in addition to the channels of Vocal RF mics for performances only. The presentation/podium & lav mics for presenters & host are dealt with by the broadcast audio mixer & do not pass through our systems. We also record the 5.1 & LtRt mix directly from our desk as well as the 5.1 & LtRt from the Broadcast truck mix. We send our 5.1 & LtRt music mixes to the Broadcast truck/audio mixer where they come up on his desk & it is sent out to the satellite for the broadcast feed from there. We actually listen to that 5.1 & LtRt return on our desk to make sure the mix is within CBS's audio specs & that it sounds like it should. Each recorder had 160 audio channels to record, with 4 external Avastor hard drives for each recording system. Each performing artist receives 1.5 hrs of stage time for sound check/camera blocking. After their time is up on stage the mixer moves to our 2nd truck, did I mention that we have 2 trucks. : ) The #2 truck is absolutely identical to the main truck that I'm working in & it handles the continued tweaking of the mix after the stage time is over. I am in direct communication with that audio team & tell them which Pro Tools recorder they can have as well as which take the mixer wants to work with for both audio & pic (did I mention that I'm capturing video as well on a MacBook Pro using Black Magic Media Express as QT Apple ProRes 422LT files, this MacBook Pro also doubles as the Pro Tools satellite system for video playback that I mentioned above) which I have properly labeled in Pro Tools with a Marker & the video has the Artist's name & take number. They then take control of the machine I give them. We then move on to the next act coming to the stage for sound check/camera blocking, all of this happens simultaneously as I'm readying for the next rehearsal. As soon as the 2nd truck is done with the recorder I give them, they let me know & I put it back into recording service. I play a bit of leap frog with the recorders after the start of each day, I've got a system down for knowing what is what on each recorder & for which mixing engineer did what performance on which recorder. It sounds more complicated than it is, either that or I'm just used to the work flow now. : )

After Dress Rehearsal on show day, both music trucks are used for playback for any concerns the 2 music mixers may have as we usually don't have much turn around time before the actual show starts. Then the main music truck readys for the live show. During the show the 2nd truck does all of the line checks as we are unable to do them because we are currently mixing a live act. They contact me that we have a “full boat” on the next act performing or they let me know if an input changes or is “on the bus” (meaning it is no longer an active channel). This truck also serves as a back up should the main music truck go down for some reason. If the 2nd truck in back up mode also go down the 3rd back up would be for the broadcast mixer to use the FOH mix.

I handle the track sheet assignments documentation & their various changes making sure that the mix assist & mixer are up to date on any input changes. This documentation is done in File Maker Pro on a MacBook Pro. I capture video of the rehearsals for playback during mix tweaks prior to broadcast on a 2nd MacBook Pro (yes, there are a lot of Macs happening here). I also capture video of the rehearsal & live broadcast as well. At the end of the show the track sheets are exported as .pdf files from File Maker Pro & placed on the 1st external record hard drive. The video capture QT file is on it's own dedicated external hard drive. Both are handed over to the Academy with proper drive labels. Then we strike & 2 hrs after the show we are loaded up & ready for both trucks to leave the Staples Center. 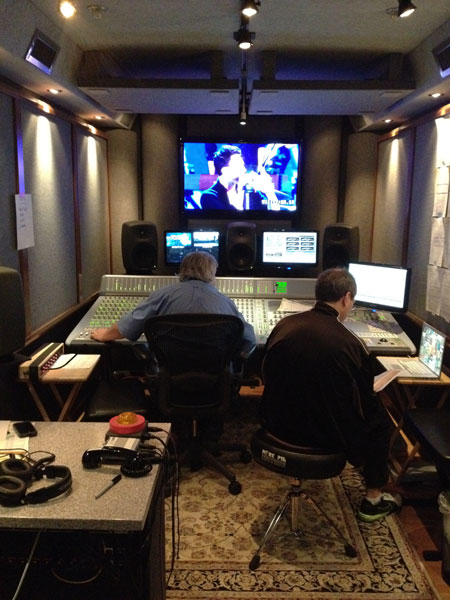 Is there a piece of gear that has saved you over and over again that you can’t work without?

I am also a Re-Recording Mixer for broadcast & I don't have a particular piece of gear that has saved me over & over, but I do have some plug-ins that I can't live without. #1 is Izotope RX2 it's an absolute necessity! #2 is Waves WNS, a tremendous life saver as well. #3 is Speakerphone, truly amazing. #4 the C4 is quite versatile & I can use it quite a bit for various problem areas.

In your field, who do you look up to and pull inspiration from?

I look up to all of my audio colleagues as each & everyone of them has valuable information or experience to share. I really look up to Ben Burtt, Randy Thom & Walter Murch when I'm in my post audio arena. In my live award show arena I look up to Eric Schilling, John Harris, Jay Vicari, Joel Singer, Michael Abbott, Paul Sandweiss & Mark King. Both arenas have engineers that are not only extremely talented, but very humble & absolutely passionate about audio. I try to emulate them & am always respectful to everyone I work with.

If you’re watching at home, listening, what do you hear that makes you want to do things better the next time you’re behind the board?

Anytime I hear a really cool sound design implementation, I file that away for future reference. It also inspires me to keep taking risks when I'm either designing or mixing to push the envelope of creativity.

This is probably my favorite question to ask professionals because it’s happened to all of us and we learn and grow from it. Has there been any mistake you’ve made while growing in your career that you could pass on to readers?

I'm perfect & have never made a mistake. ; ) It's not one that I made, but I was witness to it & the aftermath very early on in my career & it stuck with me. Always, Always, Always take responsibility for your mistakes, never ever blame someone else or the gear. The moment you try to shirk that responsibility it will eventually shine an unfavorable light on you & others with lose respect & confidence in your abilities.

I think I heard you’re a Chicago Bears fan. Is that true? Myself, being from Detroit, that might raise a problem.

It's true, I'm a die-hard Chicago Bears fan! I have no beef with Lions fans, now Packer fans, that's a different story.

I worked with Stacey at the Goodman Theatre in Chicago. She's a fantastic person, and tremendously talented. Great to see what she's up to these days. Thanks for posting this.
Top
Post Reply
2 posts • Page 1 of 1

Return to “Film and Television”